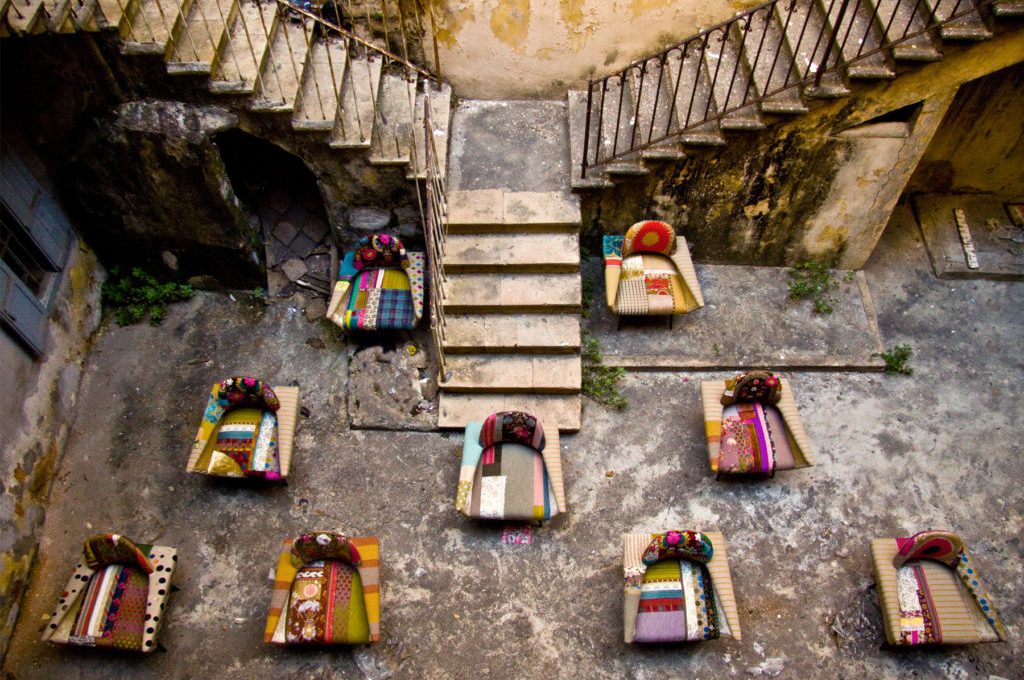 A team of 35 talents from different walks of life – artisans, embroiderers, upholsterers, carpenters and visual storytellers, with roots across Middle East, are gathered under the Bokja umbrella for the last two decades, to share with the world the contemporary Lebanese creative legacy and its dialogue with other cultures & times, irreverently immortalized in fabric, fashion and interior design objects. Juxtapose, the fascinating contrast between exquisite and the apparent irrelevant, ugliness converted to beauty, destruction as playground for the bold and the new to thrive, plus a skillful manner to deliver, via collage, a philosophical, yet humorous, unpretentious and sometimes delicate perspective on life itself, are all part of the Bokja’s DNA. Hoda Baroudi and Maria Hibri founded the business fueled by their gift to articulate opinions through textures, visual language and matter, under the charming excuse of aesthetics meeting functionality. Who said diplomacy or political analysis can’t sit on the same bench with design, over a tea?

WHAT WOULD MAKE YOUR SOUL SING? WHAT MAKES YOU HAPPY?

HUDA & MARIA: We are happiest while in the midst of our creative process. The moment when all possibilities are up in the air and we are unsure of what direction to take.

A CHILDHOOD STORY THAT ANNOUNCED THE CREATIVE PERSON YOU ARE TODAY:

HUDA: There is one memory I recall, when I remodeled our family home as a teenager. The place was stripped naked and I had to dress it a new skin; this is when I first understood the complex process of weaving so many different elements, materials, colors and patterns together, translating them into a unified home.

MARIA:  When I discovered that I can put words together and making them dance and tell a story. Storytelling, composing and assembling. I started since I was a child and in Bokja I found a space for it. Not a day goes by where I don’t feel grateful for it.

BEST CONTEXT EVER FOR INSPIRATION WAS:

HUDA & MARIA: When we are on the road. We are in constant search of textiles, patterns and colors to study, collect, and use in our creations. These collected textile fragments are our main source of inspiration. We are interested in when they were created and by whom, how they can be replicated and modified, how they can ultimately be shared and communicated.

THE PROJECT YOU LOVED MOST:

HUDA & MARIA: “Seven Stages of the Heart” is a series of seven chairs we made in collaboration with designer Wyssem Nochi. One is to sit on these wide-seat pieces in a meditative posture. The series illustrates the process of freeing oneself from materialistic tendencies and earthly desires.

HUDA & MARIA: “The Arab Seasons” is one of our most celebrated projects, presently in the permanent collection of L’Institute du Monde Arab, in Paris. Two of the key pieces of this project are a pair of maps depicting the Arab world through textile. Two maps side by side; each of the Arab World, each with a different message.  The map of the Arab Fall interweaves imported jeans as a backdrop for the sad reality of an Arab world where imported fads and fast foods have replaced the timeless traditions and native delicacies. Iconic imagery, such as the flying elephant, serves as a reminder of all the inane slogans that have been forced upon generations of an incredulous citizenry across the region.

The map of the Arab Spring uses an antique rug for its foundation, representing the core values of the Arab culture that should be the bases of any new beginning. Like discarded political ideals, the rug is in a dilapidated state and in need of resurrection, yet the designers have embedded a sense of optimism and rejuvenation through a variety of visual icons, including a woman riding a horse on the path to a new and unknown world.

THE BEST THING ABOUT LEBANESE CREATIVITY IS: