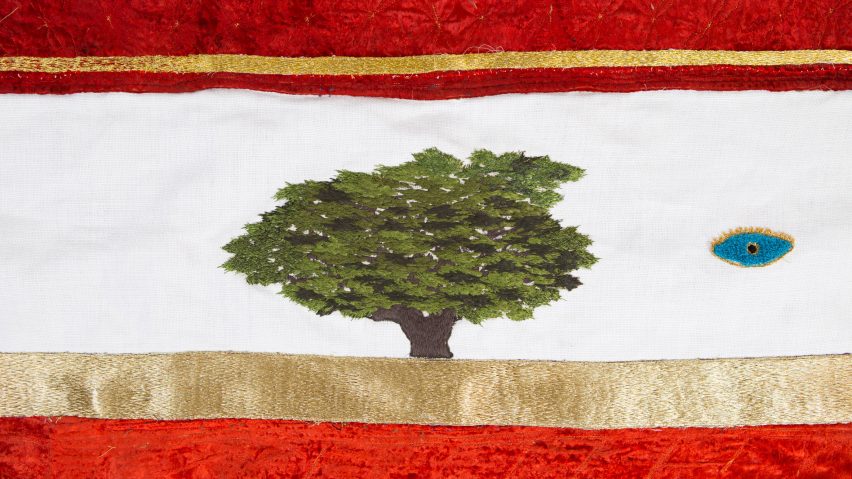 Hoda Baroudi and Maria Hibri have transformed the Bokja showroom in Beirut into a community centre where people can bring home furnishings damaged in last month’s Beirut explosion to be repaired using signature red stitchwork.

Baroudi and Hibri, the designers behind Lebanese brand Bokja, started the Bokja Mends initiative to help people whose homes were damaged in the Beirut explosion on 4 August by repairing and re-upholstering damaged home goods for free.

“Bokja Mends is simply a means to support the unsupported and to protect and preserve memories of those who have lost more than just their homes,” the studio told Dezeen.

“Thinking about all that’s lost sparked an instinctive reaction to do what we can for our community. We are hoping to help rebuild a sense of comfort.”

The explosion of 2,750 tons of ammonium nitrate at a harbourside warehouse on 4 August caused widespread destruction in the Lebanese capital and is estimated to have injured more than 5,000 people.

Bokja’s own spaces in the city were impacted by the blast. “Our boutique in Saifi Village was stripped to the bone; window-less and frameless but still hanging on,” the studio said.

“We have transformed the showroom into a community centre, offering it to local organisations on the ground from which they can dispense aid. Our atelier near Basta was shattered but it’s still standing strong.”

The artisans working with Bokja Mends use a signature red stitch to sew the pieces back together, an initiative that the studio calls “stitching Beirut back together again”.

“The signature stitch is a red stitch inspired from a surgical suture normally used to close and heal wounds on the human body,” Bokja explained.

“Upon receiving a broken upholstered piece, we proceed by removing, cleaning and reinforcing the damaged textile before applying the embroidered stitch.”

So far, people have brought in sofas, armchairs and bed headboards. The studio said that it was unsure of what to expect due to the extent of the blast, but is prepared for all sorts of furnishings.

“As dedicated menders and fixers, we are hoping to restore some of the people’s comfort,” the studio told Dezeen.

“Through repairing and upholstering a piece of their homes, we aim to preserve their memories by reassuring that all is not lost, just transformed.”

Lebanese architects and designers shared their first-hand accounts of the huge explosion in the days that followed the blast with co-founder of design studio T Sakhi, Tessa Sakhi, describing it as “beyond an apocalypse”.

In response to the blast Beirut-born type designer Nadine Chadine created the Li Beirut typeface designed by contributors including Erik Spiekermann and Mamoun Sakkal. The typeface is on sale to the raise funds for victims of the devastating explosion.

Read the article on Dezeen