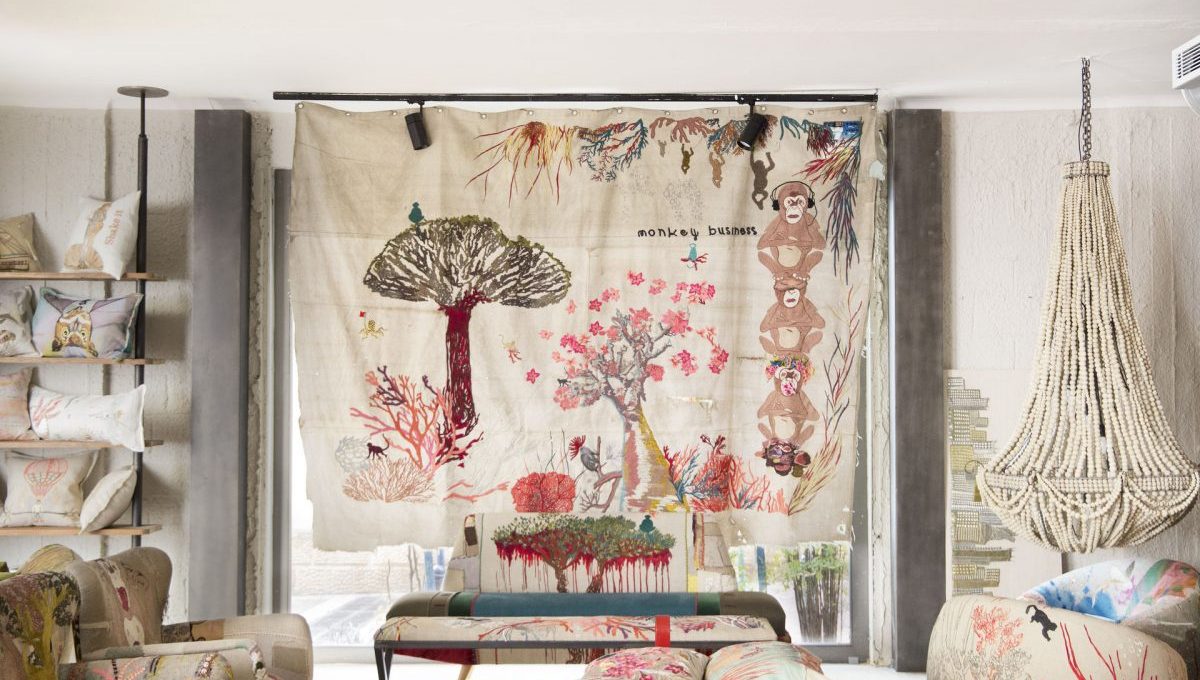 “The three wise monkeys, which once embodied the proverbial principle of positivity, today are used as a way to communicate disengagement,” says Hoda Baroudi, co-founder of the Beirut-based design studio Bokja, who describes the studio’s recently launched Monkey Business collection, a socially-driven, yet intricately designed furniture line that puts a playful spin on some of today’s more serious issues.

“Here, we portray the monkeys as having turned a blind eye to the fading colours of the coral reef or to the bleeding sap of the impressive Dragon Blood Tree found in the Socotra Island in Yemen – a paradise on earth forgotten amidst human conflict,” she explains.

Together with co-founder Maria Hibri, the partners depict whimsical characters and fictional landscapes in this latest collection – and in their work generally – using locally sourced materials and Levantine-inspired patterns to create beautifully crafted products.

“We source inspiration from our surroundings, direct experiences and general observations,” says Hibri. “Within our lifetime, we’ve experienced certain events which forced a type of resilience in our society, shifting perceptions and breaking boundaries.”

Every piece is produced at Bokja’s atelier in Beirut, with 35 artisans, carpenters and designers crafting each product to perfection. The team, which comes from 10 countries across the region – including Iraq, Syria, Kurdistan, Egypt and Lebanon – makes Bokja’s textile laboratory a truly diverse place.

The atelier has in recent years caught the attention of design aficionados and celebrities alike. Since its founding in 2000, Bokja’s surface fabrication studio has crafted narratives through embroidery and textiles, creating personable objects from furniture and cushions, to artistic interventions.

“Through trade and travel, we gather material, colours and patterns,” adds Hibri. “Sometimes the material is collected based on research and an inherent uniqueness, other times they are collected based on an emotional attraction to the piece.”

For Bokja, every gathered fragment has a story, one that is layered and fused through embroidery to create traditional textures with contemporary flair. In this case, too much monkey business isn’t such a bad thing after all.